Disclosure: WiredGraft is reader-supported. We may collect a share of sales or other compensation from the links on this page.
By Wiredgraft Editor 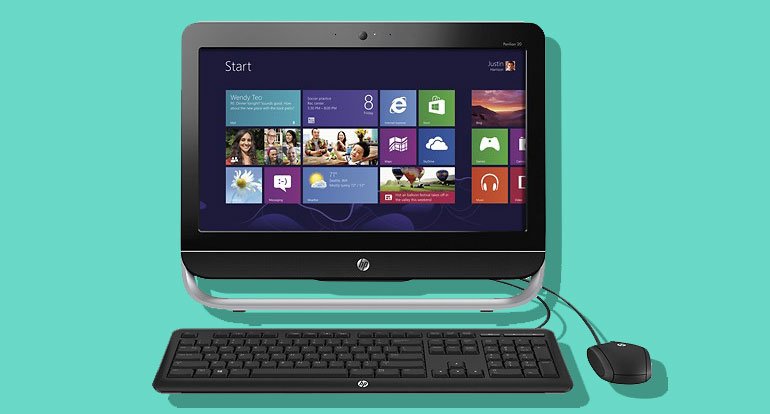 Ever since Apple’s iMac, he is considered the design crowning on the PC market – the all-in-one PC. It not only saves you space but also disturbing cables between monitor and computer. In terms of optics, the choice is clear. But all the technology has to be accommodated in a small space – in one screen. Therefore, all-in-one PCs are usually more expensive, especially if they are to be powerful. Processor, memory, hard disk, graphics card, screen resolution – there are numerous criteria to consider . Here you will find them all in a clear table – true to the motto “all in one”.

Purchase advice: How to find the right All-in-One-PC in 2020

1: All-in-one PCs are computers whose technology is built-in behind the screen.

2: The use of an all-in-one computer with a mouse and keyboard is usually wireless via Bluetooth.

3: All-in-one PCs are technically mature. However, since they are difficult to extend or convert, they are of no interest to gamers or hobbyists.

A PC is now standard in many households. It offers the opportunity to play, shop or organize your administration. You also get access to the digital world. But when you buy a computer, the question arises about the type. Is it enough to have a laptop, a PC plus monitor and keyboard or even a tablet?

In the following, we would like to show you the advantages of an all-in-one computer that combines the essential components of the classic PC in one screen. The devices are very space-saving and yet technically mature. Since most manufacturers use aluminium for the all-in-one PC, it is also visually appealing. In addition, due to its lightweight and almost wireless use, it can be quickly set up somewhere else.

In our All-in-One PC Comparison 2018, we present you with several models that would be guaranteed top positions in all-in-one tests. We explain what matters and what makes a good computer.

An all-in-one PC is also referred to as an all-in-one computer, PC All-in-One or AiO-PC for short. This means a PC whose components are integrated behind the screen. Thus, no tower of a classic computer is needed.

All-in-one PCs are not a reinvention. They were already in the 1970s but in an extremely large design. The devices of the time were rather niche products that did not arrive in the broad masses. The attitude toward all-in-one PCs changed when Apple presented the iMac in 1998.

The successful computer has successfully established itself. To date, state-of-the-art iMacs are being produced, but they now have to share the market with other sizes like Samsung, Asus or Sony.

2. Pros and Cons of the All-in-One PC

Due to their design, all-in-one PCs are popular computers in smaller office rooms, domestic workrooms, student rooms or as second computers. Anyone with limited space and a high level of design will be satisfied with an all-in-one computer.

great flexibility, as screens are easy to swivel or even relatively easy to take and place in another location.

the performance of the graphics cards is usually worse

in the event of a fault, the entire computer can not be used

Note: All-in-one PCs are the most power-efficient devices among computers. They consume an average of 50-200 watts at full power. In terms of power consumption, they are more like a laptop. Desktop PCs, therefore, require much more power because the monitor, tower and keyboard each draw their own power.

3. Purchase advice: What to look for when buying an all-in-one PC?

Basically, you should know that a pure Home Office All-in-One needs to have different requirements than an All-in-One computer connected to the multimedia centre or console.

Office computers, which are used for surfing the Internet and for the use of common office applications, are already good with an all-in-one PC with lower performance. In general, a two to four GB of RAM and a 2.3 GHz processor is sufficient. More important are the interfaces, so you should pay attention to sufficient USB ports.

A multimedia all-in-one PC needs, in any case, an HDMI interface, a large display and a minimum of six to eight GB of RAM.

3.2. The operating system: Windows or iOS?

This question is almost a matter of faith. Because real Apple fans swear by the operating system of Apple, while classic Windows users trust in this operating system for generations. The fact is that both types have their advantages and disadvantages.

Both systems are according to various All-in-One PC and compare different all-in-one computer tests greatly matured and are technically on a high level. There are potential all-in-one PC test winners on both sides, so you should familiarize yourself with both variants.

Below you will find the respective advantages and disadvantages of the two most important PC All-in-One operating systems at a glance:

The screens show very good quality in the all-in-one PC comparison. Most models offer pictures in HD or Full HD. The 16: 9 aspect ratio can be found on most all-in-one computers, making them easy to watch for TV.

An all-in-one PC touch screen can be easily operated from a display size of 27 inches. All-in-one computers with a smaller display are easier to operate with a matching pen.

With a touch screen, almost all Windows devices are equipped in an all-in-one comparison. Your technology is very mature. In some cases, Samsung All-in-One PCs can even be controlled with gestures. In most all-in-one PC tests, a touch screen has a positive impact on the assessment.

Tip: The personal benefit of a touchscreen is not always present in everyday handling. If you’re sitting across from a 27-inch display, hand-held navigation takes longer than with a traditional mouse. In addition, the danger increases that the screen may fall over with frequent contact.

The heart of every computer is the CPU or the processor. He is significantly responsible for the performance of the PC since he controls all components. He is responsible for RAM, hard disk and all other hardware components. In addition, a processor controls the temperature, power supply and other parameters.

To ensure the high performance of the best all-in-one PCs, the processors have multiple cores. All-in-one PC comparisons show that if the AMD or Intel processor has at least 4 cores and has a speed of 2.8 GHz, it is likely to become an all-in-one computer test winner.

Cheap Medion all-in-one PCs are equipped with slower processors – with only two cores and a speed of 1.7-2.1 GHz. These computers are sufficient for surfing the web, text applications, and other common software programs. However, once the computer is used frequently and in different ways, applications may crash or slow down.

The higher the price, the better the performance

Memory and processor performance depends on the price. With a low price, you get a passable all-in-one PC, which is technically not very strong. The situation is different with the expensive all-in-one PCs. Here, high-quality parts are installed, which increase the overall performance.

The memory has a significant effect on the speed of the applications. A memory of an all-in-one PC should, therefore, amount to at least two GB for normal use at home or in the office without complex graphical applications or games.

It is guaranteed that only those All-in-One PCs will emerge in the test as all-in-one computer test winners who are equipped with at least 16 GB. With a memory of this size, multiple applications can run smoothly at the same time.

Gamers and graphic professionals will need even more storage capacity. The test winners of various all-in-one computer comparisons offer 32 GB and more for the fluid application of complex software.

Desktop computers and even some laptops have significantly more ports.

The all-in-one computer with mouse, keyboard and printer is operated via Bluetooth. Numerous all-in-one PC tests have performed well on models with multiple USB 3.0 and HDMI ports. This allows you to easily connect peripherals such as printers, scanners or a camera.

An HDMI interface should definitely have your future all-in-one PC, for example, if you want to watch TV through the screen or connect your Playstation.

4. The main manufacturers and brands of all-in-one computer

Questions and Answers about the All-in-One PC

5.1. What are Affordable All-in-One Computers?

If you want to buy an all-in-one computer and only pay for the price, then you have to compromise on the features, operation and performance. You already get cheap all-in-one PCs for about $500, which will serve you well for common office applications.

True high-end devices that perform well in all-in-one PC testing cost up to $1,800. For this, they can also convince gamers, be used as a multimedia centre and at the same time perform many complex applications.

Real pros are not afraid to open the screen of their all-in-one PC to retrofit it. We advise against it, however. You can put together an all-in-one PC right from the start if you have enough hardware and software experience.

There are some configurators that allow you to create a custom computer step by step. For example, you can put together an all-in-one PC for gaming that has all the essentials.

Tip: If you are interested in the hardware, then you should use a desktop computer for it. You can disassemble and expand and retrofit as you like.

An all-in-one computer with test winner potential can be obtained on the Internet, in specialist shops or in partner shops. Having the Internet on an all-in-one PC to buy has the advantage that you may save money thanks to price comparison. For this, you will receive advice in stationery stores and usually also the right accessories.

The demand for all-in-one PCs with SSD hard drive is increasing as the benefits outweigh:

very quiet, as there are hardly any mechanical components

their speed is very high, so data is read much faster.